Connect and share knowledge within a single location that is structured and easy to search.

Should we change the name of this site to Polkadot?

The original discussion for the Substrate site's finalized name was held here. There, we already had some discussion and conflict around the inclusion of "Polkadot" in the description of the site. The original post by staff states:

We slightly shortened the target audience description, compared to what the proposal currently reads — "for developers building blockchains with the Substrate SDK, including all parachain developers building on Polkadot, Kusama and other related technologies" — since we think that if the second half was present we should rename the site so its scope is slightly wider than just Substrate.

I think we are coming to agreement that this site should really be called polkadot.stackexchange.com, since Substrate is just a subset of the overall Polkadot ecosystem, and the questions on the site so far have been all around Polkadot.

You can see from the tags page that the #1 tag at the moment is polkadot.

Furthermore, the brand of Polkadot extends far further than Substrate, and this will overall be better for the community.

Do you think we should rename this site to Polkadot?

Short answer: If this is to be accepted, the domain should remain substrate.stackexchange.com but the title should be broadened to Substrate & Polkadot; just like the Unix & Linux Stack Exchange.

No. If you change the name to Polkadot only, you will limit this site to a specific ecosystem.

Substrate is a superset to Polkadot and therefore should be the preferred name. Just as Daniel mentioned; and he is well on point.

What you are looking for is potentially improving the help/on-topic pages and the tour, e.g.,

Substrate Stack Exchange is a question and answer site for developers building blockchains with the Substrate development framework, such as Polkadot or Kusama. It's built and run by you as part of the Stack Exchange network of Q&A sites. With your help, we're working together to build a library of detailed answers to every question about Substrate.

What do you think?

Edit: I just found this and I think this strengthens my point not narrowing down the scope further:

Edit: I specifically meant adding the site's scope to the help/on-topic page, something along the lines:

Please look around to see if your question has been asked before. It’s also OK to ask and answer your own question.

The following questions are considered on-topic for the Substrate Stack Exchange:

I'm not sure who has the privileges to edit these pages.

But that's just cosmetic. The main point is to build a brand around the site. You can easily call it Substrate but everyone will understand that it can be much more if communicated well.

I personally prefer the Substrate name for the long-term - though as has been pointed out the unfortunate short-term consequence is that the Polkadot name is more recognizable.

I always thought of Substrate as a superset of Polkadot rather than the other way around: 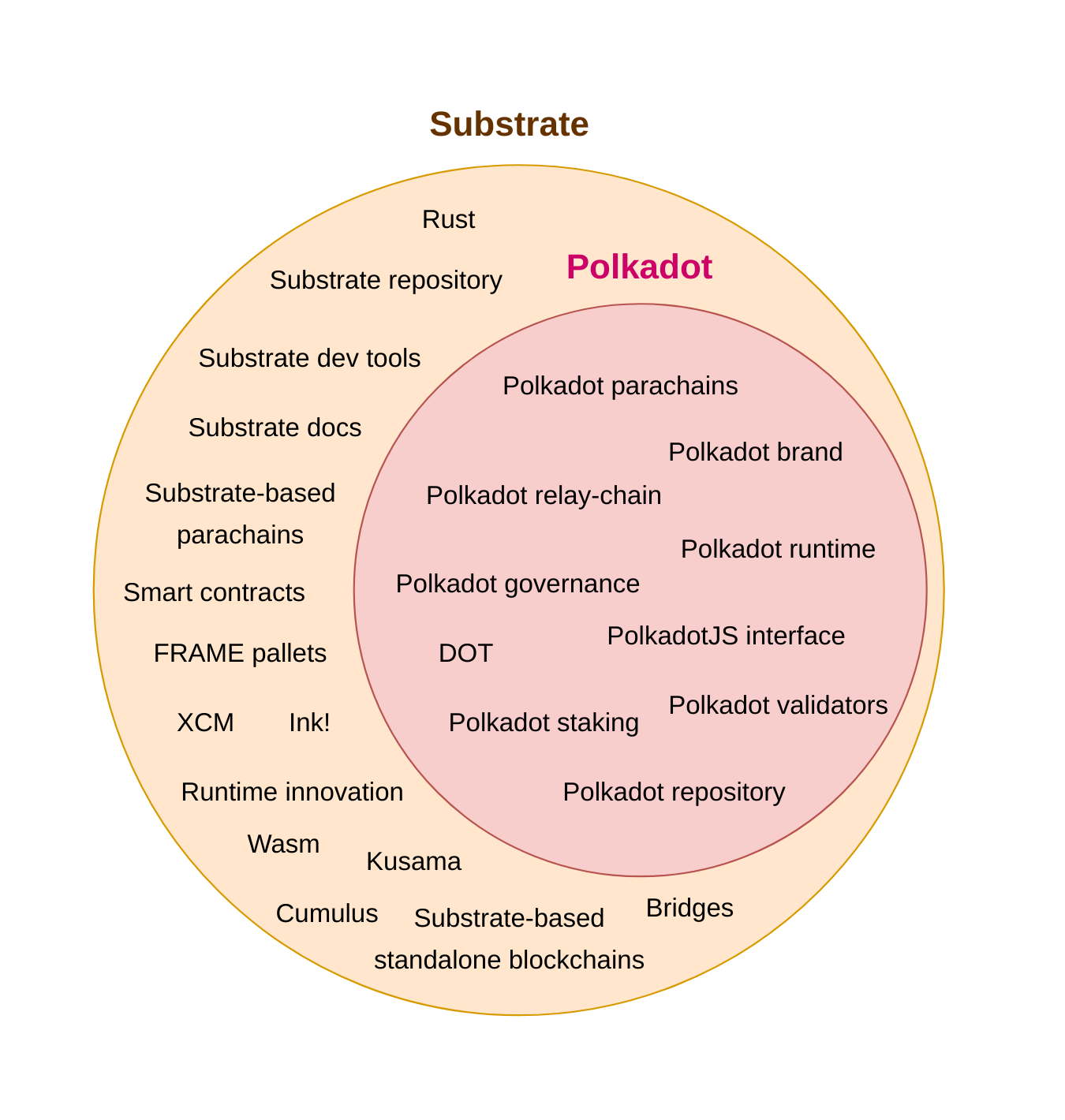 Also, even though a lot more people are aware of the Polkadot name than the Substrate name - it's not obvious to me how many of them would be interested in signing up to Stack Exchange to ask (mostly technical) questions.

Overall I'm mostly in favor of what @Afr wrote above and at the same time do recognize that "Polkadot" has more name recognition.

I'm actually very excited in what I see in this SE:

And I would certainly like to see questions on e.g. Gossamer here when that hits the mainstream. I would really love it if more of the actual parachain builders give their view on the SE naming as well. I certainly would like to have questions about their platforms and chain-specific SDKs appear here more often.

This really is much broader, as evident by the usage, than any one specific technology and is pulling in enthusiasts from a number of different chains. Each have their own day-to-day issues with commonality in the tools that are being used to build.

"Substrate" may have issues, but imho, as an umbrella term, it is better than "Polkadot" just because of the fact that the latter can also refer to the token. I certainly think of the relay chain when I hear it, my wife thinks of the token when she hears it.

As a final thought: I would not consider myself an expert on naming, parts in the little ecosystem I work on get complaints about naming quite often. (And the umbrella name, polkadot-js, actually pre-dates the introduction of Substrate)

Personally, I believe that the strongest brand is polkadot. News articles refer to polkadot, not substrate. Polkadot is the main crypto, sitting centrally in the ecosystem as the token of the relay chain. Substrate blockchains also have their own tokens but most will rely on the relay chain for cross-chain communications at some point.

When you're developing with substrate you're already using polkadotjs or some other polkadot branded software. This points towards substrate being a subset of polkadot based technologies.

In summary, I think renaming this stack exchange to polkadot.stackexchange.com would make sense in the wider context, reduce confusion, and most likely strengthen the polkadot brand.

Ok, my thoughts on this difficult topic.

Substrate is a Rust-based blockchain framework. Since we're going into strict nomenclature, then it really starts and ends pretty much at the Parity Substrate repository with a few small pieces of tooling and the individuals/orgs/teams which use it. Uniquely Substrate technologies include Frame, OCWs and a number of pallets (the basic design/proposition for many pallets predates Substrate).

The meaning of "Polkadot", though is somewhat more multifaceted and broad. It is:

Of the two Polkadot is, I think, the looser term here.

I think it also important to understand the proper heritage of the technology when "blessing" a name:

Many key technologies in Substrate (e.g. Grandpa, Babe, NPoS staking) did not come out of nothing: they were devised by the Web3 Foundation specifically for Polkadot or (e.g. in the case of using WebAssembly and libp2p) were already proposed as technologies core to Polkadot prior to their eventual implementation into Substrate. Substrate owes much of its composition to the Polkadot's proposition and conceptual development, not the other way around.

I think it also crucial to consider the relationship of Cumulus, XCM and message transport systems (like XCMP and bridges) to the name "Polkadot" and "Substrate" since many questions do tend to be asked about them.

There has been a diagram posted in another answer which I think is not indicative of reality. I don't really see either as being a superset of the other. However, I would especially disagree that XCM, Cumulus, Kusama are about "Substrate" more than "Polkadot", indeed quite the opposite: Substrate's contents and proposition would remain wholly unchanged without any of these existing. Conversely, they are all crucial to the existence of the Polkadot protocol.

There's nothing too surprising in these conceptual maps and I've omitted quite a lot of stuff, but it's enough to build a bit of a picture about what I think would be considered more conceptually connected to one name as opposed to the other.

Neither name works perfectly, and it is quite unfortunate that one must be selected.

We want to field questions concerning off-chain workers and ink! as much as we do about XCMP and Polkadot-js. We want to field questions from those who are creating parachains with other (not yet invented parachain SDKs) as much as we do from those who are attempting to create a private solochain with zero interest in joining the Polkadot community. So it must come down to judging one against the other.

In my mind it seems to be marginally better to label our technology ecosystem "Polkadot SDK" because:

This has the very obvious disadvantage of making it much harder for people who are using Substrate to develop a solo chain and who are unaware of Polkadot to find their answers. But all indications to me are that such people are much smaller in number than those who know of Polkadot but not of Substrate.

I see the logic of people above who are saying that "Substrate is superset". I think however it is still too narrow.

Substrate can be used for creating parachains[^1] and standalone chains. Right now, it seems that the vast majority of the usage is the former. From my observations, it might be well past 90% of parachain builders. This is reflected in the biggest tags.

[^1]: blockchains that are hosted on the Polkadot blockchain.

Then, I see Substrate to be only as a tool. In the future hopefully we'll see other parachain development kits (PDK) that are vastly different from Substrate. I personally would welcome all the questions regarding the other PDKs in the Stack Exchange portal in question.

And even on top of that, there is at least another one implementation Substrate called Gossamer. It's described there as "Polkadot Host", but I assume you can do the very same things as with it as with Substrate (@Afr correct me if am wrong). After all Polkadot node is Substrate with additional, mostly validator, logic. I personally would welcome questions about other Substrate-like implementations on the portal in question.

Assuming I managed to convince that Substrate does not work very well.

When I say "Polkadot" I mean:

I agree that in order to see through those lens you will need to squint quite some. But I definitely think way less than if the name was Substrate.

I personally thought other alternatives, like Web3 (referring to the fact that the project is backed by web3 foundation), but the term already lives its own life and it would be just unfair to grab it.

Not the answer you're looking for? Browse other questions tagged discussion site-name .

Welcome!
This site is for discussion about Substrate and Polkadot Stack Exchange. You must have an account there to participate.
Help
Visit chat

5
What would be a good name for the chat room?
1
Should we have multiple languages on this Stack Exchange site?
18
Investigation of Commitment User to Beta User Turnaround
3
What can we do to advertise to Asia devs about this site?
4
Should we be encouraging parachain specific questions on this site?
39
Leaving Private Beta, and Initial Pro-Tem Moderator Election!
7
Site renaming, and next steps for defining target audience and scope
6
When will this site graduate out its "Public Beta" state?